Accidental Death, Survivor Guilt, and Grace: What It Feels Like When Tragedy Strikes in an Instant

25 years ago, I almost lost my life, while a mother, father, and their 9 year old daughter did lose theirs - on impact as we hit each other head on in a horrific automobile crash that changed my entire life in an instant. 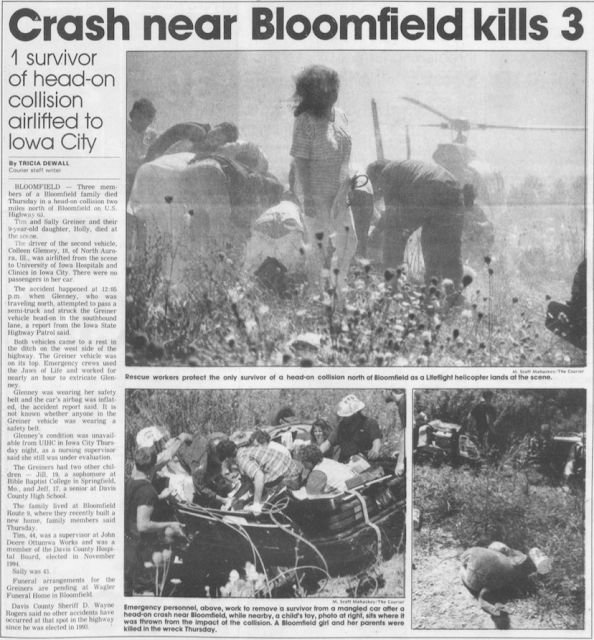 I was in great spirits the morning of the accident. Having driven my older sister Maggie to college in MO the day before, I stayed overnight and met some of her friends before venturing back to IL in the morning. I was 18, with only a week to go until I started my college life in Boston at Berklee College of Music, and while it had been an incredible summer with my high school friends, I was SO EXCITED for this next chapter in my life. I even remember the mix tape that was playing – the song “Come Down” by Bush was blaring as I sang along at the top of my lungs.

Next thing I remember, my head was against the steering wheel and I tasted blood. Some idiot kept asking me the same questions over and over – “Was there anyone else in the car? Do you know what day it is?” That last question, asked to determine any brain damage, was so ironic – of course I didn’t know what the date was. Who does when they’re 18? Now that date will never leave my mind.

Next I remembered lying on some very scratchy grass, with people telling me to hold on, that it wouldn’t be much longer. Then I was in a helicopter, where I was being airlifted to the nearest major hospital, University of Iowa Hospital & Clinics. Apparently while in the helicopter, I screamed at some of the first responders to stop touching me because everything hurt so damn much. I don’t remember this. I’m glad for that.

I was in the intensive care unit and intubated for the first few days. I couldn’t see anything because they had taken my contacts out of my eyes. I couldn’t talk because of the tube down my throat. I remember at one point vomiting but there was nothing I could do to call for help. Luckily I wasn’t intubated for very long.

While this was going on, my mom had received a call at Holy Angels School, where she taught, in our hometown of Aurora, IL. The police had tracked her down there to tell her I was in the hospital, the only survivor of a major car accident, and I was conscious. She needed to drive the three and a half hours to the University of Iowa immediately. There was some immediate confusion – at first they thought it was my sister Maggie in the accident. And of course, this was 1995 – way before cell phones. Imagine getting that call as a parent, and having to drive all those miles while your daughter lay in the ICU, a jumbled heap of broken bones. She and my dad met at a gas station on the way to University of Iowa and then drove together. By this point they knew it was me, not Maggie, who was involved.

I immediately had exploratory surgery to see what shape I was in. I had broken both my ankles, crushed my right heel, broken my left kneecap, broken my pelvis (left side), broken my right elbow, and broken my eye socket on my left side. Somehow, I had escaped internal injuries and brain injuries.

When my sisters got to the hospital (my oldest sister Kate was studying at Luther College in Decorah, IA, so she wasn’t too far away), they came in to visit me in the ICU. I said to Kate, “Hey Kate – guess what? I’m going to get lots of presents now.” I don’t remember saying that, but I am so proud of myself for making a joke while my body was in shambles. I also think this is a trait that I have continued through life – I always look for the silver lining. Always. It’s important.

I didn’t know what had happened to me – I had such little memory of the time after the accident, and as for the accident itself, I remembered nothing. Zilch. Last thing I remember is stopping for fast food on my drive. Then, nothing. I am grateful for this. I know that memory is likely in my brain somewhere, but I don’t think I’d ever be able to get back into a car if it resurfaced.

A few days after being in the hospital, once I was more conscious and slightly less drugged, my parents finally told me what happened. This is where the most lasting damage from the car accident comes into play.

The road I was on in Iowa was a country road, marked safe passing with a dotted yellow line. Apparently I was at the top of a hill, and there was a semi-truck moving slowly, so I decided to pass. The road looked free and clear from the top of that hill, so I made the move to pass. When I got about halfway, at the side of the truck, all of the sudden a car appeared from the other direction, having been hidden in a dip in the road. It was too late to do anything other than swerve. Unfortunately, we both swerved the same direction and hit head on. As I mentioned, the three occupants of the car died on impact. The parents and their youngest daughter. They also had a son and daughter closer to my age that were not in the car.

There are so many feelings that go through you when you realize you caused someone else’s death (multiplied exponentially by the number of people who died). God, the guilt. The horrible, horrible guilt. While I understood that logically it was an accident, if I had not tried to pass the truck, it never would have happened. Even now, when I think about this for too long, I cry in buckets. That guilt that comes when you caused someone else to lose their life never goes away. Ever. You can reconcile it. You know that if it had happened to someone else, you’d say, “But you didn’t know! You didn’t know the car was there.” While that’s true, it doesn’t change the situation.

The Iowa Department of Transportation did a study of this road after another near-accident in the months afterwards. They sat at the top of the hill in a pickup truck and timed it – from the time a car entered the dip, it was 5-10 seconds later before the car reappeared at the top of the hill. As a result, they marked the road as a “no passing” zone. While this does help me deal with my guilt, it doesn’t eradicate it. Not at all.

I was in the hospital for a month. I had surgery on both feet, my knee, and my elbow. I was in traction for 3 weeks in the hospital where I could not move my body to more than a 75 degree angle, in order to heal my pelvis. I’m very fortunate that over the years I’ve only had continuing issues with my right foot (which I’ve had 8 surgeries on in the past 25 years). As I get older, I definitely am feeling the arthritic joint effects on my elbow, knee, and hip, but it’s manageable.

The family of the people who were killed sent me a card in the hospital. Their grace and forgiveness took my breath away.  They told me it was not my fault and were helped through their grief by their strong faith.  It boggles my mind. A few years after the accident, I emailed a bit back and forth with the older daughter and we then met up for lunch one day. She, also, had such grace and forgiveness. It was definitely a moment of healing for me. The older son wasn’t able to get to that place. He was very angry. I would be too.

For a long time I wondered why this had happened. I like believing that everything happens for a reason, but I struggled with this. My personal faith in God was incredibly shaken. What good could possibly come out of this situation? People would tell me, “God saved you. God has plans for you. You’re blessed.” But then what does that say about those who died? They’re not blessed? God had no plans for them, God didn’t save them? That’s not fair. So I struggle with that.

As the years went on, I wanted to somehow give back to the world since I had been so fortunate. I ended up donating a kidney to a stranger (who became family to me, along with his family). That story will be for another blog post. But donating a kidney was, and continues to be, the best decision I’ve ever made. And I do think that if I had not had the accident, I would not have felt so nonchalant about donating a kidney, due to my extensive experience with surgeries and recovery. So maybe that’s the reason. Maybe I was able to extend someone’s life because of the accident. That gives me some peace.

So here I am, 25 years later. It’s surreal, and almost feels like a bad dream. It was so long ago and my memories are so limited. I lost touch with the daughter whom I had met up with. I wish I hadn’t. I can’t find her online, or her brother. Maybe there’s a reason for that. I hope their lives have been peaceful, to the extent that they can with what happened to them.

The other day my friend sent me a podcast about unintended death that inclided a link to an incredible New York Times article, The Sorrow and Shame of the Accidental Killer. In it, there was a link to a recovery group called Accidental Impacts for those who had caused another person’s injury or death. As I read through the posts, I cried and cried. I’d been looking for something like this for a long time. I can only handle reading the stories in bits and pieces. It brings back those feelings of loss, regret, and guilt like the accident was yesterday. It can be too much. But it’s an incredible healing space that I am so grateful for.

I tell my story because it loosens the grief, loosens the guilt from a huge roiling block of emotion into more manageable pieces. And in the meantime, I work at giving myself grace. That is, and will continue to be, a work in progress. 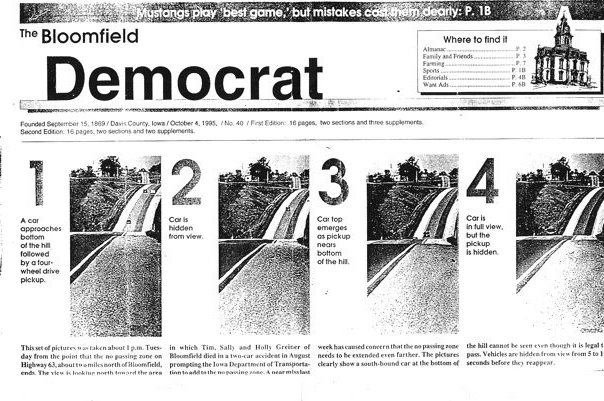